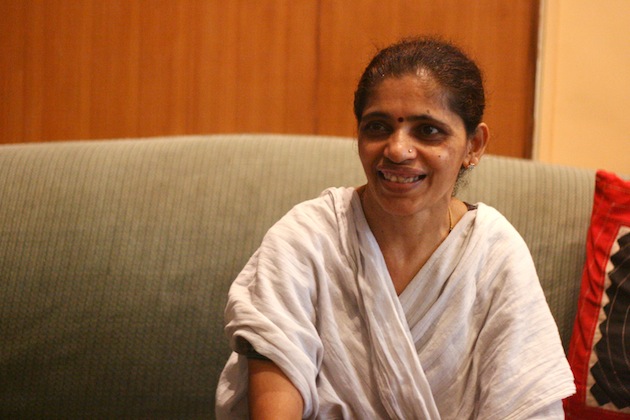 Srimati Udupa only met her husband four times during their engagement. She met no other marriage prospects before her parents set up their marriage. | Photo by Bethany Trueblood

Dressed in a green traditional saree with a red border, the teacher was about to get married in front of 500 people on the patio outside her home. Like all women in Samagodu, a small South Indian village, she would be moving away from home and joining her new husband’s household. She would have new responsibilities and maybe have to give up her job.

And she’d only met her husband-to-be four times.

Marriage for many women in India is not about love. It’s about families getting along. It’s about convenience. It’s also about class. About caste. About finances. About location.

Srimati knew from the time she was a little girl that her parents would be choosing her husband. She could’ve married for love if the man were from the village, of the same caste, or a certain surrounding area and her parents knew his family. But someone like that was hard to come by.

Her older sister and brother were already married. At 25 years old, she was next in line.

The people of the village and workers from the area gathered to see her entrance into life as a married woman that winter. She felt nervous about joining a family she’d only met once. But this was her future. And, although reluctant to leave her current life, she was ready.

Narayan Udupa was a rickshaw driver for schools from Mysore, a nearby city. Narayan and Srimati’s brother shared a mutual friend. He was from the same caste as her family and had met her parents. She met him only once before the engagement began.

In a six-month engagement, Srimati saw her fiancé infrequently. He would come from his city for coffee or to talk. He was the first and last man she ever met with marriage in mind. She was not given a say in the matter. 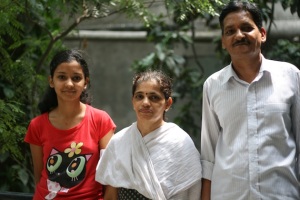 Aditi, Srimati and Narayan Udupa created a happy family from an arranged marriage, as is common for many Indians.Srimati Udupa only met her husband four times during their engagement. She met no other marriage prospects before her parents set up their marriage. | Photo by Bethany Trueblood

Twenty-two years later, Srimati is happy. She and her husband take care of a family’s home in a South Delhi colony. They cook, they drive, they do some cleaning. They have one daughter. And Srimati said she agrees with the arranged marriage concept.

“It’s better to be peaceful and in an arranged marriage,” she said.

Arranged marriages can be successful because they are matched so carefully, said Dr. Ramani Sundaresan, a psychotherapist in New Delhi who often works with married couples. They match background, religious beliefs, communities and other societal traits.

“It makes it easier (than traditional courtships) because you are already given a head start,” she said.

With marriages that aren’t arranged, like Sundaresan’s own first marriage, unanticipated differences may arise.

“You fall in love and then you discover there are so many things else,” she said.

When the entire family is involved in the marriage, getting married isn’t as simple as feelings. It can’t be. A successful marriage in this environment rests on things sturdier than romantic love. Being of the same religion, in the same caste and from the same area is key. With both families in agreement, it is much easier to function.

In an arranged marriage, if any problems arise, a woman would ideally have the support of her family, Srimati said. This is less likely to hold true for unarranged marriages.

But Srimati does have some qualms about the whole thing.

“I would like more choices or to be able to decide instead of just being thrown into one relationship,” she said.

Getting to know each other before the wedding helps, Srimati said.

Ramani said a man and a woman entering an arranged marriage should meet many times before marrying. They should talk on the phone, go to a movie, get dinner. They need to get to know each other, she said.

Aditi, the couple’s 17-year-old daughter, studies in Karnataka, a two-and-a-half hour plane ride form Delhi. Srimati said she would be supportive of her daughter marrying for love. The difference between her marriage arrangements and her daughter’s lies in the family’s location.

In the village, Srimati faced many pressures to marry from her six sisters, three brothers, parents and extended relatives. Living in a big city separate Aditi from the family pressures of village life.

In Indian culture, arranged marriage values compatibility over romantic love, the rational over the emotional, the planned over the serendipitous, the family entity over the individual and the uniformity over the diverse. It values the matching over the competing. It values cooperation.

For Srimati, it works.

One thought on “Arranged marriage: Making it work”