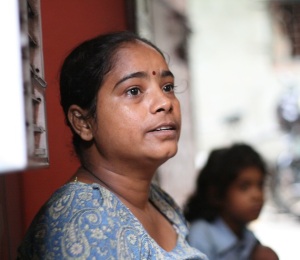 Manjali Bhagwandas has been struggling with domestic abuse in her marriage for nearly 14 years. She is now taking a stand against it for herself and her children. | Photo by Bethany Trueblood

Manjali Bhagwandas didn’t know what to expect on her wedding day 14 years ago.

She had been shown one photograph of the man with whom she was destined to spend the rest of her life.  Prior to the wedding, all she knew about him was that he worked for an oil mill.

When she was 18, Manjali’s parents selected a 21-year-old man named Rakesh to be her husband.  As part of the wedding ceremony, the groom’s parents were given a dowry of a black-and-white television, jewelry, a cabinet, and utensils.

Two months after her wedding, Manjali was preparing dinner and relaxing in her home.  Rakesh arrived home in the late afternoon, showered and took a walk by himself.  When he returned, he approached Manjali and began hitting her repeatedly. He did not speak a single word.

This day marked the beginning of physical abuse throughout the marriage.

“Nobody tells the wife that the man has a bad temper or abusive parents,” she said.

Manjali was scared and confused. She continued to be hit, by her husband’s hand or a wooden stick, without understanding why. Then her in-laws gave her an answer. Rakesh’s sister soon approached her with a rumor that someone had seen Manjali walking in the street hand-in-hand with another man without a headscarf on, which is a symbol of a married woman.

“Before marriage, everyone is really nice, really sweet … After the marriage, the way you really are is what comes out,” Manjali said.

Manjali’s brother-in-law arrived in her home one day, immediately after her husband had just slapped her. Out of fear, she ran to him in search of comfort and relief, which he returned with a strong embrace. This only made Rakesh more jealous, insecure and angry. His suspicions of Manjali’s supposed affairs were multiplying, and so were her bruises. She says alcohol intensified his rage.

In the beginning, Manjali lacked the means to make a move to a safer place.

“I couldn’t run away because it would be an insult to the family,” she said.

The beating and abuse never eased. Because of family ties and societal norms, running away would have put many more pressures on her.

“Women without a profession, without stability, will stay in bad marriages because they simply don’t see any other options,” said Sundaresan, who works with many arranged marriage couples.

Manjali gained strength as time went on and she began moving into her sister Veena’s slum in Delhi for months at a time. Rakesh would eventually apologize and they would move back in together as a family, although the issues with alcohol and abuse continued to resurface.

During the course of the marriage, Manjali gave birth to three children who are now ages 13, 11 and 7. She wishes for them to have a good education. She has not yet thought about marrying off her kids.

In recent months, Manjali was given the advice to never allow Rakesh inside the home when he has been drinking. She took the advice from her friend and, about six months ago, did not let her husband inside the house for one full month. He claimed to have quit drinking during this time.

Her three children hoped their parents would work out their problems, and after expressing this, Manjali allowed Rakesh back in the home. For the following 10 weeks, Manjali didn’t speak a word to Rakesh. The children took care of the communication between the two.

Manjali began speaking to Rakesh at a family wedding so as to not create rumors or draw attention. They are currently on speaking terms and living together as a family.  She now works as a sweeper in Delhi, while he works as a cleaner.

Now, she keeps the family together for her kids. She would love if she had never gotten married and been given the chance to help the poor.

“There is a lot more to life than marriage,” she said. “Marriage is the worst part of my life … It is the worst decision one could make.”

Manjali believes in destiny. She doesn’t resent her parents for arranging her marriage to an abusive man. She was destined, she says, to have an unhappy marriage.

One thought on “Arranged marriage: Living with abuse”